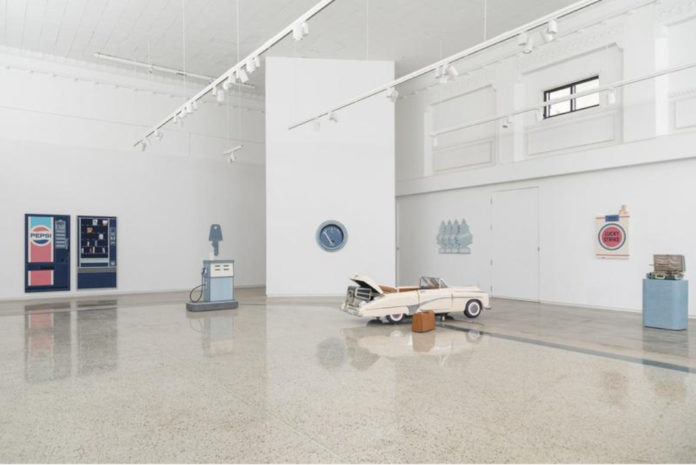 Doyle asks viewers to question the objects and observe these details. “The vending machine and the water cooler have long operated as a kind of American working-class watering hole: the site of exchange and comparison where talk of weekend plans, promotions, and all manner of posturing and peacocking occur.

The competition referred to in the title is, in fact, the typically masculine compulsion for success and a relentlessly American and bottomless keeping-up-with-the-Joneses.”

“His practice aims to undo American myth-making by its very products—cigarettes, vending machines, urinals—rendered in denim, a signature material for the artist. Denim calls forth a range of associations, from the excesses of the cotton trade as it relates to slave labor to military uniforms to the co-opting of ‘working clothes’ by layabout outsider culture and beyond.

Doyle’s critique of American culture, vis-à-vis its objects, stems from the very fiber of their makeup; they destabilize from within,” stated the gallery. All of the pieces are in an almost 1950s look to them resembling the 1950 Iconic American Artifacts.

Nick Doyle chose some of the best artifacts to recreate. For example, the vending machine is a staple in the American image. The vending machines have Pepsi and Coke written on them, arguably the most popular cola sodas in America or even the whole world. It is questionable to put a glass of water to some onlookers, but the glass is even an iconic round American glass.